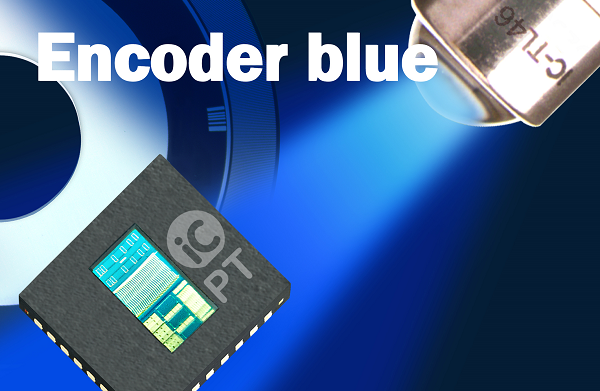 Modern semiconductor processes provide small, shallow structures which can take advantage of the shorter penetration of blue light to improve efficiency. What’s more, smaller structures allow an interlaced photodiode layout which produces sine and cosine encoder signals with lower offset. In addition, a high fillfactor for the photosensitive areas is achieved by an equivalent geometrical transformation.

Blue LEDs are the basis for white emitters which are in extreme demand by the automotive and illumination markets. Today, long term temperature-stable blue LEDs are available which outshine the IR and red LEDs used in encoders so far, because they offer higher light yield and efficiency at even lower cost. Optical position sensors benefit notably as a result of the technological progress of both LED and CMOS technology. iC-Haus has optimized the new incremental scanners in its high resolution iC-PT H-Series especially for blue light. The integration platform for such single chip encoders is denoted by the trademark Encoder blue.

The new encoder chips of the iC-PT H-Series combine optimized scanning and signal interpolation in the smallest available space: a flat 5 x 5 mm² optoQFN package with a plane window. Due to the optimized Phased-Array structure of the opto-chips, a minimal scanning area of only 1.9 mm x 3.1 mm is sufficient to generate 10,000 pulses per revolution using a code disc of only 26 mm diameter, for example. The blue light increases the contrast with lower noise and the improved efficiency reduces the current consumption within the optical system.

The devices generate low-jitter encoder quadrature signals with index via 4 mA push-pull drivers in single, double and four-fold resolution for precise motor regulation. Besides, conventional Hall sensors used for motor commutation have been replaced by the integration of three additional scanning tracks. Here, the code disc determines the required commutation signal and can be easily adapted to suit the required motor pole count.

The index gating as well as the interpolation is easily selectable by pin. Output frequencies of up to 1.6 MHz are permitted, enabling motor speed control at up to 10,000 rpm with 10,000 pulses per revolution. Analog test signals can be activated for ease of alignment and test of the complete encoder assembly.

The small scanning area and high sensitivity both help to reduce the power requirements of the encoder LED – an operating current of a few milliamps is sufficient. This improvesthe LED’s lifetime, especially at high operating temperatures. The iC-PT H devices control the LED and compensate for aging and temperature effects. iC-Haus provides evaluation boards for the scanners together with plastic code discs and
snap-on blue LEDs to allow judging the signal quality benefits in a direct comparison with IR illumination. The higher forward voltage of blue LEDs and the integrity of the materials used within the encoder have to be considered at system design.

Encoder blue is now intensively tested and qualified by well-known encoder manufacturers and is expected to replace the current IR LEDs and scanners in existing series products at least for higher resolution.
Product Overview
Application Guide