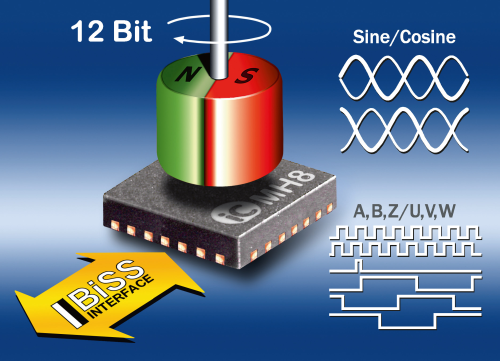 iC-MH8 is typically used in industrial, automotive, and medical applications, such as:
• Fast motor control with short sensor latencies
• Fast position control in robots with safety requirements
• Speed control of up to 120,000 rpm at a 12-bit resolution
• Absolute detection/measurement of angles of rotation
• As universal absolute encoders (with sine/cosine and SSI/BiSS options)
• As substitute resolvers or optical absolute encoders.

The angle resolution can be programmed in up to 4,096 steps per revolution. With an ABZ incremental signal output edge rate of 8 MHz, speeds of up to 120,000 rpm can be recorded. 360,000 rpm can be obtained with a resolution of 10 bits.
UVW commutation is available for 2-pole, 4-pole, or 8-pole DC motors. For safety applications the differential sine/cosine outputs provide redundant capture and transmission of the angle position at 1 Vpp to 100 Ω. The sine/cosine, ABZ, and UVW outputs have been implemented as configurable RS422 line drivers, enabling the device to be perfectly adapted to suit various line lengths and transmission rates.
A bidirectional or synchronous serial SSI/BiSS-C interface is also integrated for data output. The resolution, hysteresis, edge distance, zero position of the ABZ and UVW signals, and direction of rotation for iC-MH8 can also be configured through BiSS-C. These settings can be permanently stored in an OTP-ROM.
An automatic gain regulator compensates for variations in the Hall sensor signals due to fluctuations in the ambient temperature or changes in distance to the magnet.
iC-MH8 operates on a supply voltage of +5 V (±10%) within an operating temperature range of -40 to +125°C.
Product Overview
Application Guide