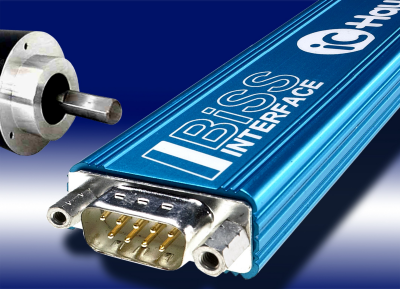 With the BiSS-to-PC USB adapter MB4U, a BiSS master with C protocol and high-speed connection is now available for the first time ever, enabling bidirectional data exchange with the available device memory at the same time as the cyclic output of measurements.

The adapter can be used for both linear and rotary position sensors (encoders), and also for light curtains and distance measurement applications that support either BiSS or SSI as a protocol.

The adapter can also be used for the following measurement and test applications:
- Development
- Production
- In-field testing
- Calibration.

The RS422 standard is used as a physical layer, making the BiSS interface electrically compatible with the standard SSI interface.

The serial interface permits triggered measurement reading in either SSI or BiSS C protocol. Reading is quartz stabilized, timed according to the parameterized cycle times.

Using the adapter it is also possible to synchronously log several sensors within one BiSS C bus structure. Up to 8 BiSS C sensors with a total data length of up to 512 bits of core data are directly supported. A CRC checksum is integrated in all data packages that are transmitted to correct any possible transmission errors. A hamming distance of 3 allows for 1-bit error correction and 2-bit error detection in the recorded sensor data.

In addition, memory addresses for the device ID, serial number, OEM data areas, and EDS, an optional ID plate, have been standardized for BiSS C. At these standardized addresses the BiSS C sensors contain information about themselves that indexes the relevant device profile or a description file. Optionally, an electronic ID plate can describe the measurement application.

The core function of MB4U involves the BiSS C master accepting a BiSS master IP that has been integrated by an FPGA. Sensor signals, such as those supplied by optical or magnetic position sensors, are transmitted to a computer using USB via the BiSS interface. Typical BiSS binary data lengths of up to 64 bits per sensor can be set. These absolute position values are transmitted via the serial BiSS interface with clock rates of up to 10 MHz.

The USB interface is also implemented by an IP in an FPGA to ensure maximum performance of the BiSS interface on the processing computer.

The adapter makes use of a double buffer system so that it can compensate for the real-time insufficiency of Windows operating systems. With a buffer memory in the adapter, possible latencies of the USB interface and the operating system are compensated for. The adapter's own single buffer is insufficient, particularly for measurements with high data rates and those logged over longer periods of time.
The logged sensor data is stored in the computer's own memory (which is usually sufficiently dimensioned), or directly on its mass storage device.
The MB4U adapter provides voltage supplies of +5 V and +12 V that are drawn from or generated by the USB interface and can be used to power the sensor.

Customer programming of measuring devices and operating materials is supported by a generic BiSS interface DLL and by individual device DLLs as an API; thanks to the DLL concept, these can be easily deployed in a number of programming environments. Generic SSI / BiSS software is available as a free download.

Various iC-Haus demo boards can also be operated by the BiSS PC adapter MB4U. Free PC operating programs for the different products can be downloaded.

MB4U comes in a slim, space-saving 105 mm x 33 mm x 16 mm aluminum package and is thus ideal for use as a mobile measurement and test adapter.
Product Overview
Application Guide